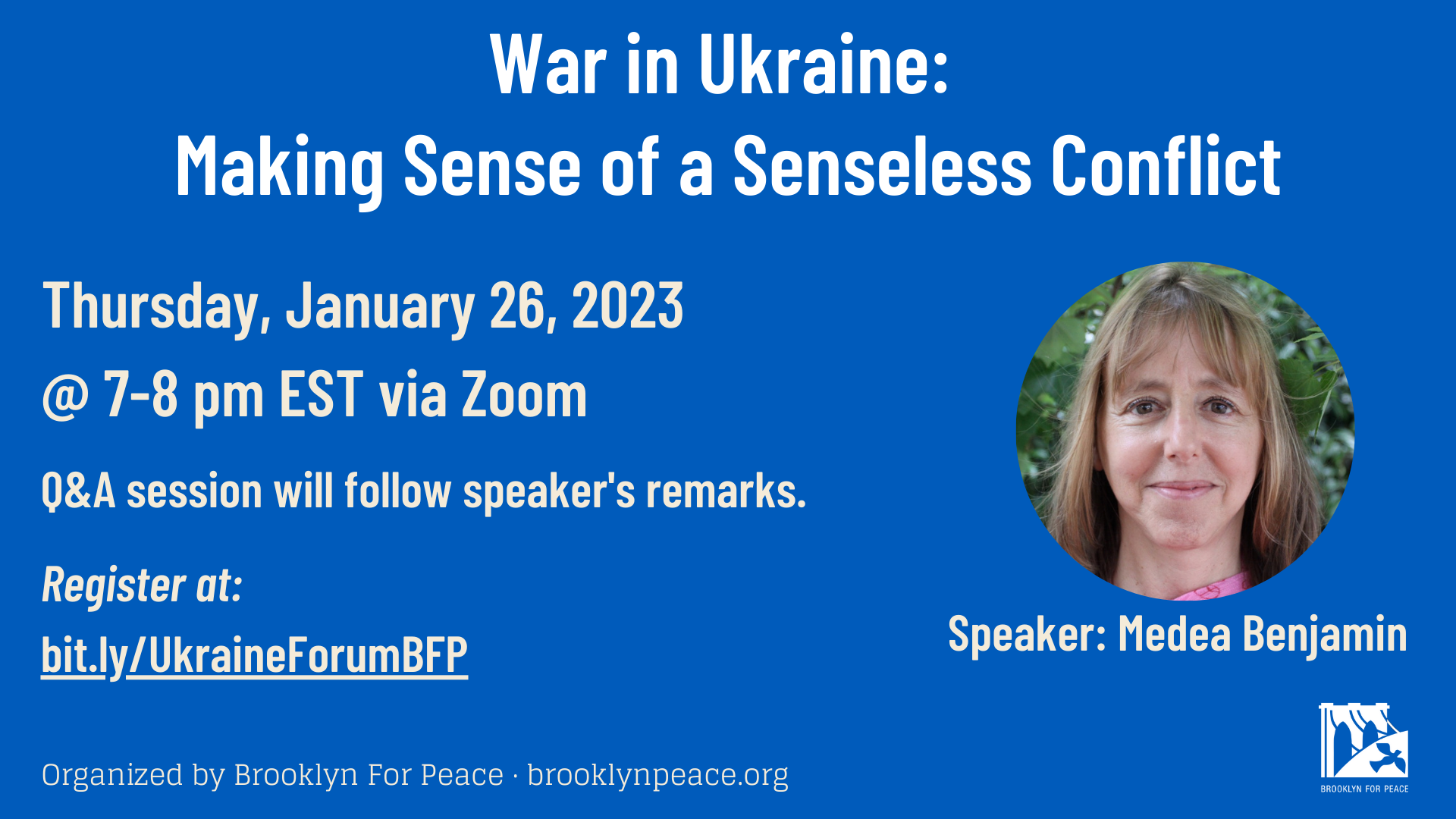 Medea Benjamin will be speaking at an online event sponsored by Brooklyn for Peace about her new book War in Ukraine: Making Sense of a Senseless Conflict. Please register to attend this event via Zoom here: http://bit.ly/UkraineForumBFP.

Russia’s brutal February 2022 invasion of Ukraine has attracted widespread condemnation across the West. Government and media circles present the conflict as a simple dichotomy between an evil empire and an innocent victim. In this concise, accessible and highly informative primer, Medea Benjamin and Nicolas Davies insist the picture is more complicated.

Yes, Russia’s aggression was reckless and, ultimately, indefensible. But the West’s reneging on promises to halt eastward expansion of NATO in the wake of the collapse of the Soviet Union played a major part in prompting Putin to act. So did the U.S. involvement in the 2014 Ukraine coup and Ukraine’s failure to implement the Minsk peace agreements. The result is a conflict that is increasingly difficult to resolve, one that could conceivably escalate into all-out war between the United States and Russia—the world’s two leading nuclear powers.

Skillfully bringing together the historical record and current analysis, War in Ukraine looks at the events leading up to the conflict, surveys the different parties involved, and weighs the risks of escalation and opportunities for peace. For anyone who wants to get beneath the heavily propagandized media coverage to an understanding of a war with consequences that could prove cataclysmic, reading this timely book will be an urgent necessity.

Medea Benjamin is a co-founder of CODEPINK and the fair trade advocacy group Global Exchange. She is the author of Drone Warfare, Kingdom of the Unjust: Behind the U.S.–Saudi Connection and Inside Iran. In 2012, she was awarded the U.S. Peace Memorial Foundation’s Peace Prize; she is also recipient of the 2014 Gandhi Peace Award and the 2010 Martin Luther King, Jr. Peace Prize from the Fellowship of Reconciliation.

Nicolas J.S. Davies is the author of Blood On Our Hands: the American Invasion and Destruction of Iraq. He has written extensively for Huffington Post, Alternet, Consortium News, Common Dreams, Salon, The Progressive, and Foreign Policy in Focus.