online – AFRICOM out of Africa 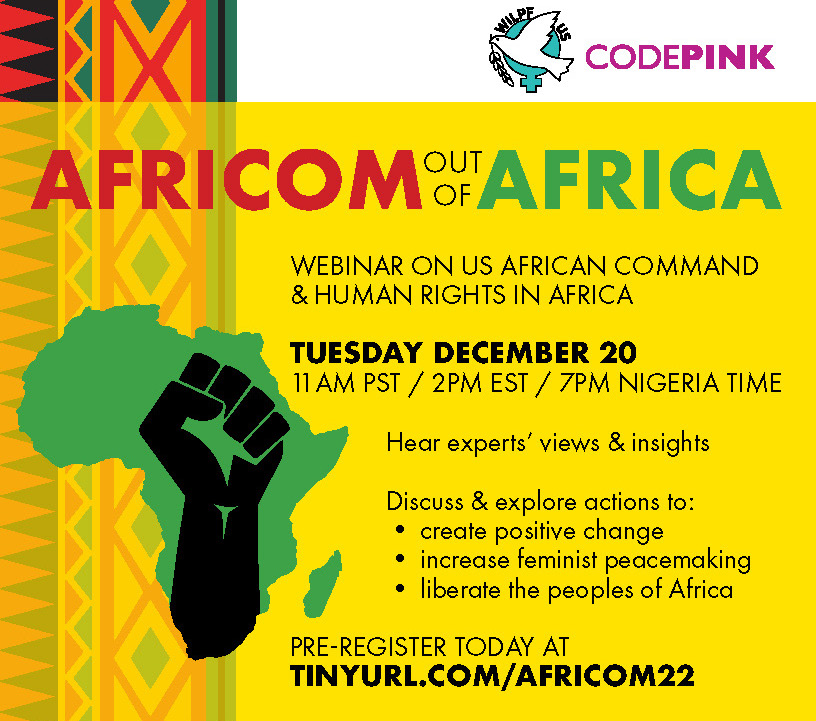 Join CODEPINK and the Women’s International League for Peace and Freedom (WILPF)-US Section for AFRICOM out of Africa, a webinar on the United States African Command (AFRICOM) and human rights in Africa on Tuesday, Dec. 20 at 11am PT, 2pm ET, 7pm Nigeria time.

We will hear from experts on Africa and AFRICOM. After an exchange of views and the insights discussion will explore what can be done to affect current conditions, increase feminist peacemaking and support the liberation of peoples on the continent of Africa.

Sylvie Ndongmo, current WILPF International President, is a human rights and peace leader with over 27 years experience including ten within WILPF. Sylvie is the founder of WILPF Cameroon and was the Section’s president until 2022. She co-coordinated the African Working Group before her election as Africa Representative to WILPF’s International Board in 2018. A teacher by profession and an African Union Trainer in peace support operations, Sylvie has extensive experience advocating for the political and social rights of women in Africa and worldwide.

Doctor Gnaka Lagoke is an Assistant Professor of history (world, African, and African-American) and of Pan-Africana Studies at Lincoln University (PA).  He is also a founding member of the Convention for Pan-Africanism and Progress, which promotes a Ubuntu-driven Pan-Africanism. Furthermore, he is a specialist and a political analyst in African and world politics, issues of International and African development, comparative politics, international justice, Pan-Africanism, and of the Ubuntu Philosophy. As a political analyst, he has appeared on several international news organizations such as Voice America, Russia Today, HispanTV, Australian Broadcast Corporation, Democracy Now, Aljazeera, CCTV, TVC News, Deutsche Welle, Afrique Media, IvoirTV, and BBC.

Bro. Imani Umoja, based in Guinea Bissau, serves on the Steering Committee of Black Alliance for Peace’s U.S. Out of Africa Network, and is a Central Committee member of both the African Party for the Independence of Guinea and Cape Verde (PAIGC) and the All-African People’s Revolutionary Party (A-APRP).

Ann Wright, representing WILPF US, spent thirteen years in the U.S. Army and sixteen additional years in the Army Reserves, retiring as a Colonel. In 1987, Col. Wright joined the Foreign Service and served as U.S. Deputy Ambassador in Sierra Leone, Micronesia, Afghanistan, and Mongolia. She received the State Department’s Award for Heroism for her actions during the evacuation of 2,500 people from the civil war in Sierra Leone, at the time the largest evacuation since Saigon. Her other overseas assignments include Somalia, Kyrgyzstan, Grenada, Micronesia, and Nicaragua. On March 19, 2003, the eve of the U.S. invasion of Iraq, Ann Wright cabled a letter of resignation to Secretary of State Colin Powell – she was one of only three persons who resigned from the U.S. government in opposition to the Iraq war. Since then, she has been writing and speaking out for peace.

The webinar will offer action opportunities for people to take steps to get the US out of Africa.